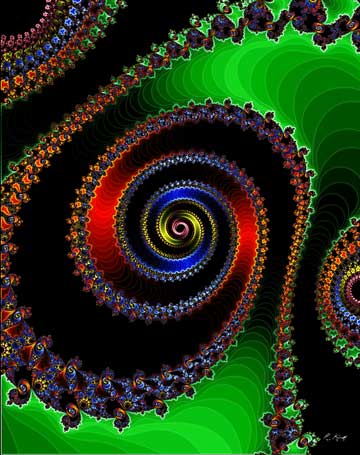 What is a Self-Organizing System?

Self-organizing systems are defined not as physical structures, but as process structures. The three essential characteristics are:

Self-organizing systems are generally unpredictable, although most exhibit behavior that clusters around an "attractor" region of likely states, at least until some fluctuation comes along to push them over the edge into a new regime. Such events are variously known as "symmetry breaks," "phase changes," and "bifurcations." The new attractor or region of stability is also unpredictable, but the new regime will generally be more complex and better adapted to more severe fluctuations.

There are many more fascinating properties of self-organizing systems. They tend to create the environment required to evolve. For example, the primeval prokaryotic cells created an oxygen atmosphere (poisonous to themselves) that made possible the evolution of the eukaryotes which could not function without the higher energy availability of oxygen chemistry. If this had not happened, higher life forms, like us, could never have evolved. Then there is the Gaia effect in which the biosphere of Earth maintains just the right temperature range and other life support systems required to survive and continue to evolve. The micro-processes co-evolve with the macro-processes in a harmony that simply can't be understood by studying either in isolation from the other.

"Live order forms by itself, if processes are allowed to unfold."
—Erich Jantsch, The Self-Organizing Universe

How do we fit in as agents of change?

First by asking that very question at every decision point. Human creativity is a major source of fluctuations that can produce major change with minor inputs of effort, advertently or otherwise. The more we know about how the process works, the better shot we have at ending up somewhere we like. It is not our task to control the process, but to intelligently manage those energy and information flows that are within our power, and be flexible about outcomes. We need to think in process terms and let structure evolve, to understand and value the necessary balance between order and disorder, and to become catalysts and facilitators rather than controllers. The most effective among us already live by these principles.

The most important thing we can each do is insist on the free uncensored flow of complete, accurate information. Faulty information is faulty feedback into the system resulting in faulty results, as lying leaders consistently demonstrate.

Tell the truth, trust the process and get the hell out of the way.

The Secret Life of Chaos

Prigogine, Ilya, and Stengers, Isabelle, Order out of Chaos, Bantam, 1984

Postrel, Virginia, The Future and Its Enemies: The Growing Conflict over Creativity, Enterprise and Progress, Touchstone Books; ISBN: 0684862697; (December 1999)